With a fearsome name and an appearance to match, it’s easy to see why the Root Assassin Shovel is catching the eye of many gardeners. A unique take on the traditional shovel, the Root Assassin is a double-edged serrated shovel with a sharp point that claims to make short work of even the toughest root systems.

Using such a unique design helps the Root Assassin be a very versatile shovel that will make life much easier for a range of gardening tasks. Of course, many gardening products claim to be revolutionary despite being nothing special, which begs the question – is the Root Assassin Shovel worth buying? Any shovel that struggles to dig soil and turf won’t be worth much to most gardeners, so it’s great to see how effective the Root Assassin is when it comes to digging.

It slices through turf and other soft materials with incredible ease. Should you want to dig up a hole in your lawn for a shrub, tree, or flower bed, then the Root Assassin will make short work of pretty much everything it digs into!

This makes it especially great at digging up trenches, although the fine point does mean it’s not the best for lawn edging. However, the Root Assassin really comes into its own when digging in tougher soil rich with clay and stones.

Thanks to the serrated edges, the Root Assassin is so much better at digging through tough material than any other shovel on the market. So, if you have a lot of digging to do in rugged terrain, this is certainly the shovel you want for the job! As the name suggests, the Root Assassin is highly effective at digging through roots. There are plenty of shrubs and bushes that produce very thick, deep roots that are a nightmare to deal with when trying to transport or remove the plant.

The Root Assassin makes short work of these!

Simply sink the shovel into the soil and dig away, and when you come across any type of root you only need to saw at it for a moment and the roots will be easily severed from the plant. They certainly picked an appropriate name for the Root Assassin!

The Root Assassin doesn’t just remove roots, as the serrated blade doubles as a handy pruner. The blade is sharp enough to saw through most branches without much issue, although manoeuvring the shovel like a saw does take some getting used to.

While pruning shears are still recommended for thicker branches, the Root Assassin is still a fine alternative – especially if you can’t be bothered grabbing another tool from the shed! Also, the impressive length (4”) of the Root Assassin makes it ideal for pruning hard to reach spots without having to use a ladder!

The Root Assassin should be easy enough for most gardeners to use, although it’s worth noting that it is rather tall at 4”. Granted around a quarter of that height is the serrated steel blade, but those that are shorter may have some issues when first using the shovel.

The Root Assassin weighs a modest 4lbs, so using it shouldn’t feel too strenuous, while the reinforced D-grip handle offers enough space to use comfortably.

All in all, the Root Assassin is a fantastic shovel well worth investing in! For those with tough digging and lots of deep roots to deal with in their garden, there aren’t many better tools to make your life easier than the Root Assassin! 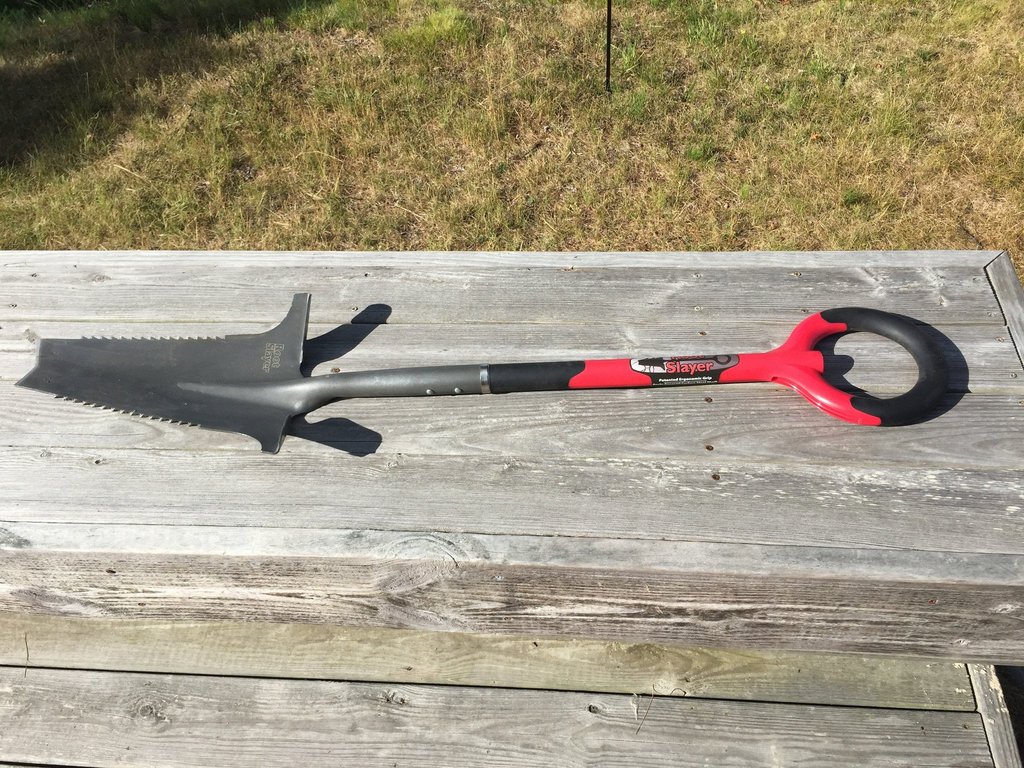